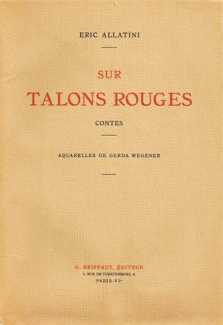 The second of Éric Allatini’s books to be illustrated by Gerda Wegener was published by the prolific Paris publisher Georges Briffaut. Sur talons rouges (On Red High Heels) is a romantic novel set in eighteenth-century France in which everything is overdone, from language to high fashion; it is in many ways a clever play on the French penchant for the ‘galante’. Gerda Wegener’s twelve illustrations are likewise a highly-skilled pastiche of engravings from France’s romantic past, including the flourishes of the accompanying captions.

Éric Allatini was killed in the gas chambers of Auschwitz in December 1943.

The book was issued in an edition of 449 numbered copies, the most expensive of which came with an additional uncoloured set of plates.