Pierre Vidal’s 48 colour illustrations for Pierre Louÿs’ perennial classic Les aventures du Roi Pausole are among the first visual representations of life in the rural naturist paradise realm of Tryphéme, as Louÿs’ book had only been published in 1901. They have a freshness lacking in many of the later illustrators’ efforts, helped enormously by the high quality of the colour reproduction in Blaizot’s limited edition. 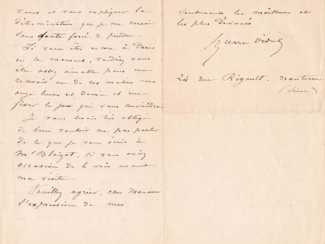 Interestingly, a letter from Pierre Vidal to a friend, dated June 1906, has survived in which he explains that he may not be able to complete the illustrations for Pausole. ‘I will have the deepest regrets,’ he writes, ‘because I had given myself wholeheartedly to this work. Yet I am confronted with so many problems, a real block to creativity ... I would very much oblige you not to talk about what I am writing here to M Blaizot (the publisher).’ Whether the problems were to do with health or pressure of work we will never know, but the work was completed successfully, and Vidal’s illustrations for Roi Pausole are among the best he produced.

The Vidal-illustrated Roi Pausole was published by Auguste Blaizot’s Librairie Lecampion in a numbered limited edition of 376 copies, of which 51 de luxe copies included an additional set of plates.