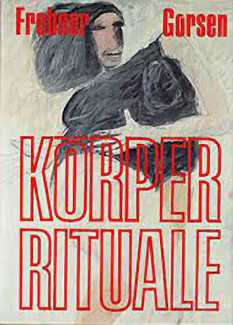 The introduction to the book explains its purpose and perspective:

This art book deviates from the conventional form of writing about an artist – the monograph – and undertakes to present artistic work based on the conditions of its creation and reception in the social context. Not only the socially mediated inventions of form as such, but also the effects of the aesthetics of goods and everyday life on the field of art under capitalism, justify the extensive inclusion of visual material from advertising and everyday scenes in an ‘art volume’.
When we classify Frohner’s works under the concept of body ritual, it is because in them the looks, gestures, postures, behaviours and non-verbal expressions of body language in mass communication have become the material for aesthetic interpretation and manipulation. The ritualised, sexualised, pornographised images of women, as seen through the lens of capitalism, is Frohner’s main focus. His collection of pictures from magazines, newspapers and advertising, as well as from classic porn, provides the stimulus for his images, emphasising the false contact and projection created between artist and audience.
Frohner intervenes in the visual forms of communication and interaction in a caricaturing and alienating manner by selectively arranging, retouching, overdrawing, and finally integrating his material into the artistic process of form. This should be seen as a gradual process of abstraction in which the psyche, the unconscious and the sexuality of the artist are involved. The proportion of unconscious symbolism in iconography is considerable in Frohner’s work; deciphering it makes it clear that the artist’s apparent sexual fetishism is a symptom and paradigm of a more general social alienation under capitalism.

Körperrituale was published by Jugend und Volk, Vienna and Munich. A limited number of copies also included a set of five signed black and white prints, which are included here at the end of the selection of paintings reproduced from the book.