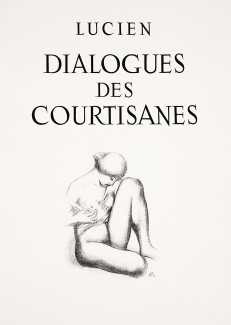 Living at the height of the Roman Empire, the audience that Lucian of Samosate (Lucien in French) wrote for in Dialogues des courtisanes (Dialogues of the Courtesans) was hardly shocked by these short dialogues between Greek prostitutes. However, two millennia of ensuing prudery made it impossible to acknowledge this part of the Lucian corpus, a set of humorous vignettes set in the context of the ‘oldest profession’, let alone translate it into a vernacular language.

The comic sketches are timeless: working girls competing for clients, dishing gossip and candid tips of the trade, men trying to keep their girls’ attention with expensive gifts. It also portrays the dark side of the prostitutes’ lives: out-of-control parties, blowhard men, and putting up with rough treatment by clients.

The hetaerae of Lucian were not constantly wondering whether their next client was going to flash a badge and haul them off to jail – sex workers in antiquity were just another occupation, like the butcher, the baker and the sandal maker. At that time, pagan temples throughout the eastern Mediterranean had sacred prostitutes, and patronising them was considered a sanctified act. The hetaerae actually had a lot more freedom than other women in Greek society.

In 1947 the Paris-based artist, publisher and craft bookbinder Henri Creuzevault (1905–1971) decided to publish an edition of Lucian illustrated with Maillol’s prints, and worked with the artist’s model and assistant Dina Vierny to choose suitable images. The result is one of the best printed collections of Maillol drawings.

The Maillol-illustrated edition of Lucian was published by Henri Creuzevault et Dina Vierny, Paris, in a limited numbered edition of 275 copies.