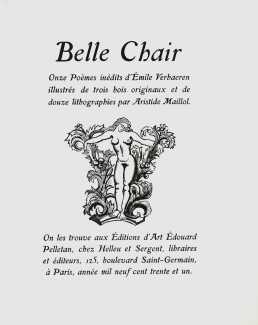 Belle chair (Beautiful Flesh) is a collection of eleven poems about physical intimacy by the Belgian poet and art critic Émile Verhaeren, dating from the 1890s but not published until after his death. Émile Adolphe Gustave Verhaeren (1855–1916) was one of the founders of the school of Symbolism, and was nominated for the Nobel Prize in Literature no fewer than six times. He was one of the most prolific poets of his era, his first collection of poems, Les Flamandes (The Flemings), being published in 1883. Inspired by the paintings of Jacob Jordaens, David Teniers and Jan Steen, Verhaeren described his country and the Flemish people in a direct and often provocative way. It was an immediate success in avant-garde milieus, but caused a great deal of controversy in Catholic circles.

It’s clear that Maillol found a like spirit in Verhaeren, and probably a similar feeling about the importance of physical intimacy in a fulfilling marriage with a talented and beautiful woman. The drawings he created to accompany Belle chair are some of his most poignant and powerful.

Belle chair was published by Edouard Pelletan, Paris, in a limited numbered edition of 255 copies.