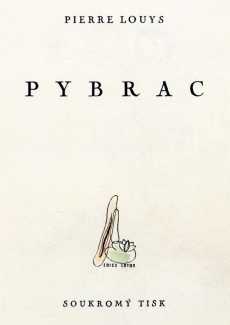 It is a telling reflection on the artistic and moral relationship between Paris and Prague in the early 1930s that the only language that Pierre Louÿs’ Pybrac was translated into soon after its publication in French in 1927 was Czech. Indeed, until the English translation by Geoffrey Langnecker was published by Wakefield Press in 2014, the 1932 Edice Lotos edition was the only non-French edition to appear.

Like the rest of Pierre Louÿs’ voluminous output of erotica, Pybrac was not published during his lifetime, but instead figured among the many secret manuscripts discovered after his death, tucked and filed away, and subsequently auctioned off and scattered among collectors. It would see its first clandestine publication in 1927, two years after the author’s death.

Toyen produced ten drawings for Pybrac, which are as explicit as they are personal. At the time she created them she was also regularly producing drawings for Štyrský’s Erotická revue, and some of the subjects clearly emanate from the same creative well.

The Czech edition of Pybrac was published by Edice Lotos in a limited edition of 300 copies, of which 61 had hand-coloured drawings.