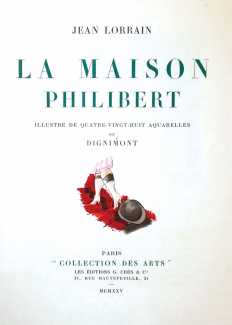 La Maison Philibert, the sixth novel of the openly gay novelist, journalist and critic Jean Lorrain, is seen by many social historians as one of the best sources of information about the French urban underworld of prostitution and its clientele around the turn of the nineteenth century. Lorrain, with the help of his friend the police commissioner Oscar Métenier, was in a position to record and understand the morals, systems and language of the demi-monde as accurately as anyone, and André Dignimont’s illustrations, also based on the creator’s personal experiences, are a perfect foil to Lorrain’s 1904 novel.

In La Maison Philibert, Mr and Mrs Philibert Audigeon run a provincial ‘good brothel’ at Aubry-les-Epinettes, near Orleans. The novel describes in detail the everyday life of the housekeepers and the whole of the prostitution system, including the ideal number of girls to employ, their social background, and the system of fines imposed on girls for bad behaviour or rudeness; all the information included by Lorrain is consistent with the sociological and health studies conducted and recorded by the hygienists and police officers of the time. It is unfortunate that no English translation of La Maison Philibert has ever been published.

The Dignimont-illustrated La Maison Philibert was published by Les Éditions G. Cres & Cie, Paris, in their Collection des Arts, in a limited numbered edition of 350 copies.