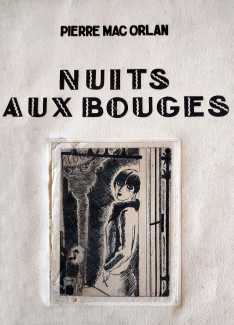 Born Pierre Dumarchey (1882–1970), Pierre Mac Orlan was a leading French songwriter and novelist whose work included Quai des Brumes (1928): filmed by Marcel Carné in 1938 and starring Jean Gabin, it remains one of the enduring cornerstones of French cinema.

Mac Orlan’s work is closely linked to Paris, especially its working-class districts and its slums. In Nuits aux bouges (Nights of the Candles), Pierre Mac Orlan plunges us into a mysterious universe of the underworld: ‘The word bouge is evocative, and has fallen into disuse. It awakens in the popular imagination a concern enriched by numerous mysterious images, in which assassination plays the essential and final role. We have to go back to the past of Paris to find the city with all the attributes that gave it such a powerful reputation of candlelit skulduggery. There are still echoes today, but nothing like what our imagination conjures at the mention of the word.’

Pierre Mac Orlan begins Nuits aux bouges with a historical retrospective, and evokes the celebrities who over the centuries frequented these places or who wrote about them. Typical are ‘the Lapin Blanc (White Rabbit) in the boulevard Barbès, where the most famous gangs met to rule the Butte Montmartre, and the Lapin Agile (Nimble Rabbit), which every week underwent a siege’. Then there are the prostitutes, ‘these young women and girls, barely out of childhood, who were neither flappers nor innocent adolescents. And then the customers appear – soldiers, sailors, dockers.’

Dignimont and Mac Orlan knew each other – and this world – well, and the five dark monochrome plates are the perfect foil for the text. It is just a pity there are so few of them.