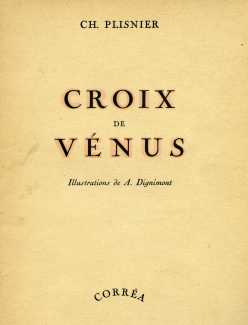 The Belgian poet and writer Charles Plisnier (1896–1952) is hardly remembered today, though his socialist writings were very popular in the 1930s and 40s. He was a communist in his youth, and briefly belonged to the Trotskyist movement in the late 1920s. He disavowed communism, and became a Roman Catholic, remaining nevertheless a Marxist. He turned to literature, writing family sagas against bourgeois society. In 1937 he won the Prix Goncourt for Faux passeports (Fake Passports), short stories denouncing Stalinism.

The Vénus of the title is the enigmatic artist Patricia Gublin, of whom her friend Maudrier says ‘Try, if you can, to seize her soul. It flees from you like sand between your fingers. On her gravestone will be inscribed “Here lies an enigma”.’ Published during the war years, both text and images capture something of the spirit of uncertainty of the time.

Croix de Vénus was published by Éditions Corrêa, Paris, in a limited numbered edition of 1,050 copies.