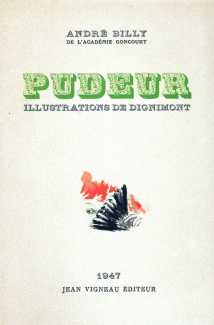 André Billy (1882–1971) was a prolific French novelist, essayist and biographer, producing thirty novels, important biographies of Balzac and Diderot, six volumes of memoirs, and more than 11,000 magazine and newspaper articles.

Pudeur (Modesty) is an extended essay exploring how the idea of modesty has developed from earliest times until the twentieth century, analysing how such a strange concept has changed, especially as a result of religious shame and piety. He includes studies of famous people who have shown unusual modesty, such as the Roman noblewoman Lucretia, and deals with the problem of modesty in literature and in painting. According to André Billy, modesty is at root a prejudice, but a prejudice which is not without its charms.

André Dignimont’s illustrations for Pudeur, despite their approximate relevance to Billy’s text, are also not without their charms.

Pudeur was published by Jean Vigneau Éditeur, Paris, in a limited numbered edition of 500 copies.