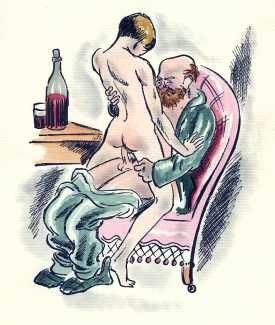 In January 2021 the Paris auction house Marie-Saint Germain held an online auction entitled ‘Curiosa Online: The Private Collection of M de C’. At Lot 326 it included ‘Paul Verlaine–André Dignimont (attributed to): Femmes, Hombres, Les amies. For the friends of Paul Verlaine [Paris, circa 1935]. 122 pages, iIllustrated with twenty plates attributed to Dignimont, not the illustrations mentioned by Dutel under his entry number 1568.’

From the title page shown by Marie Saint-Germain it appears that the Dignimont-attributed drawings were inserted into a copy of the Georges Annenkoff-illustrated Verlaine, which you can see here. The new drawings are originals, and if they are by Dignimont are the only known illustrations made by him to accompany Verlaine’s poems other than the much tamer set he created in 1942 for a Creuzevault edition of Fêtes galantes.

So are these drawings by the prolific Dignimont? The subject matter would have been very familiar to him, but the style appears a little cruder than most of his work, more akin to that of André Collot, whose 1935 Séductions you can see here. You be the judge.