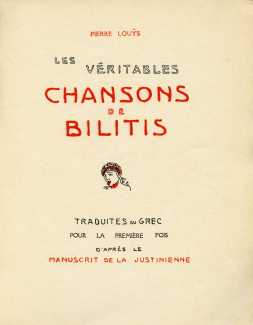 Although the numerous two-tone illustrations for Les véritables chansons are usually credited to Métivet, and have been ever since the book was first published, their crude graffitiesque style strongly suggests a much less accomplished artist. However, since the attribution is so long-standing we have chosen to include the portfolio here rather than under the prolific Anon.

Les véritables chansons de Bilitis, published anonymously, ran to two editions; the first, in 1928, was of 200 numbered copies, the second, in 1935, of a further 350 numbered copies.