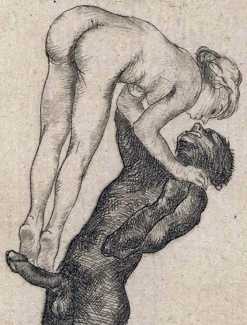 In Weimar Germany several strands of cultural experimentation and cultural assumption collided when it came to the interplay of sex, gender preference and race. Though the number of black people in Germany was small, there was an Afrikanisches Viertel (African Quarter) in Berlin, a legacy of the colonial period, with a number of streets and squares named after countries and locations relating to the German colonial empire. There was a general air of tolerance in relation to cultural mixing, but only as long as the different races knew their geographical and social place.

This small anonymous portfolio of etchings, Der starke Neger (The Strong Negro), mostly manages to steer an acceptable line between reality and make-believe, pleasure and prejudice. It does, however, play on the fantasy of white woman with black man, and on the myth of black sexual prowess. Of its time, however, it depicts the black man as a human being and not as a caricature. The quality of the drawing suggests a trained hand as well as a fertile imagination.