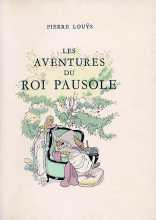 The 1937 edition of Roi Pausole illustrated by Jacques Touchet was published by Rombaldi, Paris, in a numbered print run of 3,200 copies.