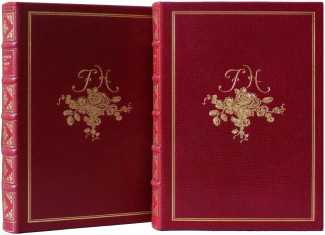 By the time Sophie Busson was commissioned by Éditions d’Odéon to produce a series of illustrations for Fanny Hill there had been no new illustrated version in French since the Édouard Chimot edition nearly thirty years earlier. Odéon pulled out all the stops, producing a luxury two-volume set with thick paper, gold embossing and raised bands on the covers, specially-printed cases, and an annotated text. 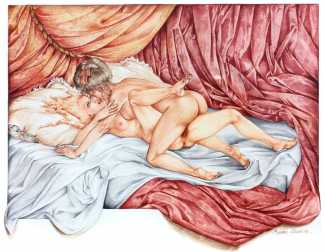 Busson clearly enjoyed producing the twenty-four watercolours, her favourite being the frontispiece to the first volume, wich she reproduced as separate prints in several versions. The style of the illustrations is very much of their time, with a tendency towards Barbie-like physiques and a rather coy representation of sexual coupling. The young women do, however, appear to be enjoying themselves a lot. 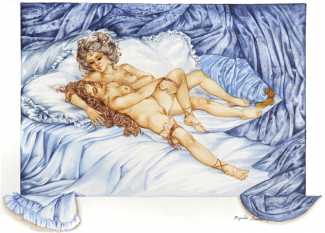 The Éditions d’Odéon Fanny Hill was produced in a limited numbered edition of 1,109 copies.