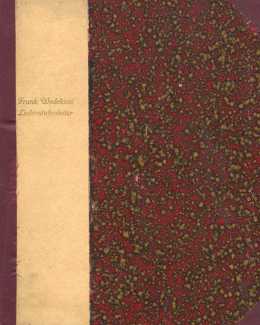 Liebesstufenleiter (Love’s Stepladder) is a suite of ten etchings that Lamm made to accompany writer Frank Wedekind’s play Schloss Wetterstein (Weatherstone Castle). ‘At the beginning of everything stands Wedekind’, wrote German literary critic Rudolf Kayser in 1917 of the new forms of expressionist theatre that were then becoming central to German culture. In Schloss Wetterstein, one of his most important plays, Wedekind (1864–1918) offers a satirical take on marriage and the bourgeois nuclear family; at the play’s centre is a rebellious teenage girl who turns to prostitution after her upbringing in an unstable household. The play was published in 1912, but a performance ban was put into effect immediately, and continued until after Wedekind’s death.

Lamm’s accomplished etchings follow the experiences of young and precocious Effie, who soberly compares marriage to acting; after all, asks Effie, does a wife not get paid for her own amusement on the stage of wedlock?

Liebesstufenleiter was produced privately in a limited numbered edition of 120 copies.