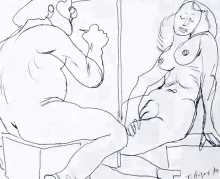 His stay in London and Ireland included visits to the island of Tresco in the Scilly Isles, resulting in a quartet of drawings from 1984 showing love among the humanoid rocks in the company of Neptune and his aquatic paramour. And as in his paintings, the relationship between nude model and equally nude artist is a common theme.