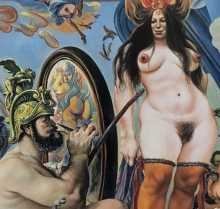 Aigler learned the principles for nude painting from none other than Herbert Boeckl, whose evening courses he attended during his time at the Vienna Academy, which resulted in a sold foundation for depicting the naked body. But following the traditions of nude painting for its own sake, or to depict classical scenes, was too easy. For a start, artist and model were never products of different worlds, especially in the context of who knew whom within Linz society. As Aigner wrote, ‘With women it’s very delicate, it’s complicated when I ask a woman to model for me. You might ask just like that, and she can sit or lie naked on your couch. Then she is lying on the couch, I’m ready to look at a naked woman, and it’s time to paint a picture. But a female nude is also a naked woman from Linz society. That’s when the problems begin. When I was younger it was easier – there were always a couple of young women in our artistic circle who wanted to catch a painter and lay their bait; it was childsplay to get a naked woman on the couch, as a model, as a Linz nude, in the painter’s studio. But it was also dangerous – in the blink of an eye such a woman was my wife, toddlers were screaming in the studio, and the woman, the Linz nude, had converted my studio into a cozy apartment.’