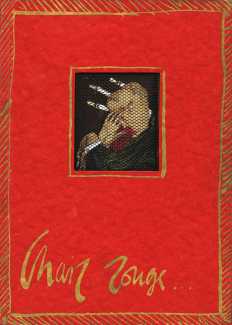 In the autumn of 1995 Les Larmes d’Eros Gallery in Paris devoted an exhibition to some of Jean-Pierre Ceytaire’s recent works, and their sister publishing company Éditions Astarte published an illustrated limited edition book titled Chair rouge (Red Flesh) to accompany the exhibition. We show here all the illustrations included in Chair rouge.

Chair rouge opens with an introduction by the artist and textile designer Marie-Ange Crespo, which we give here in full in translation from the French.

When after debauchery the pale and ruddy dawn enters into the company as a gnawing curse,
By the operation of a vengeful mystery, in the slumbering brute an angel awakens.
Of the spiritual heavens, inaccessible azure
For the man who still dreams and suffers, lifts and falls with the attention of his breath.
Charles Baudelaire

I see before my eyes a sacred image. I see the meditative, confined frame of an icon, the gold of mystical illumination, the borderline of a universe without perspectives, detached from the constraints of space, purely divine.
I see neither martyrs, nor monsters, nor a celestial Jerusalem, but bodies in intimate contact, a solitary man in stockings and pumps, lemons fixed on his chest as breasts, a dance master in a tutu, brooding with a gaze as paternal as it is incestuous over the women whose finery he has borrowed, scrupulous fingers handling and lifting the skirts of the young girls. The bodies intertwine without frenzy in a precious marquetry, with the stilted eroticism of the ladies of Fontainebleau. To each his own portion of breast, lacy, lemony, what does it matter if it stretches to the precious finger that titillates it like a young woman from a good family would hold a chocolate?
All the blasphemous perversity of mannerism seems to be here in the incongruous torsion of the bodies, in their detachment. But a detail sears the eyes of lovers suffering the boredom of an ever-repeated lust. A night eye opens when the warm body, tenderised by having fought so much with others, closes its daytime eyelids. A spiritual eye, which, without seeming to take care of carnal wanderings, follows the perfume of the incense.
Like Angele de Foligno, the most amorous of the saints, I understand that these vices result in pain, since they do not always come with consent. The boredom joins the pain, and if it continued the body would not be able to stand it. The soul sees itself deprived of its powers, and although it does not consent to violence it sees itself without the strength to avoid it: it sees between God and itself a frightful contradiction; it sees its fall and feels its martyrdom.
Faith is in Ceytaire’s painting, penetrating and bruised. The work of the devil is digging into the flesh while the artist, his hands clasping the back of her neck, is plagued by doubt and the fear of hell. Beauty and goodness, opposed in their purpose, bring him closer to Baudelaire, to his venomous passions as well as to his idealism. In the same way as Les fleurs du mal, Ceytaire’s work highlights ‘the agitation of the spirit in evil’, the inclination towards vice and the devotion to the divine. What next can Ceytaire offer from a work where, all debauchery exhausted, the biased heroes can only choose, like Huysmans, between the mouth of the gun and the foot of the cross? And what if, from this chaos of tangled, tired bodies, a spiritual dawn were to rise, gently illuminated?