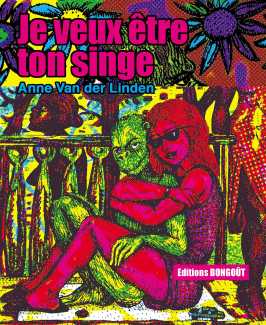 Je veux être ton singe (I Want to Be Your Monkey) came out of a collaboration with the artists Jean Rouzaud and Jean-Louis Costes. The trio had created a series of photographs in which each artist took a role – van der Linden was Jane – but the project came to nothing, so Anne van der Linden decided to create an artist’s book from the theme of the imagined love rivalry between Tarzan and Cheetah. This was the only book for which Anne also wrote the text.

The fifteen brightly-coloured hand-silkscreened illustrations depict the complex sexual relationship between woman and monkey, including some wonderful power-play and cross-dressing.