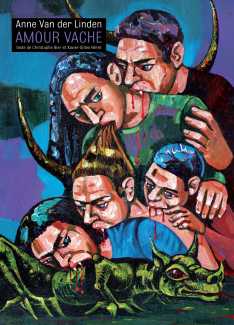 Amour vache (Cow Love) is the most complete and representative collection of Anne van der Linden’s recent work currently available. It includes both drawings and paintings, all from the period between 2015 and 2020, together with an extended and well-considered essay about her work by art critics Christophe Bier and Xavier-Gilles Néret. More than a hundred works are reproduced, providing an excellent overview of her output and demonstrating why her distinctive style has so much to say about the relationships between embodied physicality, animal instinct, social convention and taboo.

As Bier and Néret write in their essay, ‘Female desire is a powerful theme in Anne van der Linden’s work – breasts become flame-throwers; large pairs of suspended testicles are used for training boxers in a gym; a cellist slides her bow over the guts of a disembowelled man; a bespectacled woman eats shit from a defecating goat; the hairdresser’s client is being shampooed with men’s blood.
Laughter resists death. Anne van der Linden’s cow humour is our salvation. The animals that inhabit her paintings laugh more easily than the humans. Animals take their place in the canvases inured to tragedy – the placid seagull on Medusa’s raft, the cat licking its paw near a beheaded woman, the buzzing insects, the red-eyed dachshunds. Everything is teeming with animal life which seems to alleviate the fate of the mad humans. It is in the reassuring coat of a gigantic cat that the woman comes to curl up, not the other way around. The moments of bestiality no longer participate in the horror but offer happier alternatives – the monkey is doing the caressing, the snail offers its tongue to the woman’s skin, the slug hugs her, the wasp stings sodomise, the eels embrace, the lamprey sucks the penis of the elongated man while the woman is spitted on the antlers of a deer. Unlike the taboo-ridden humans, the animals know no perversions.’

Amour vache is published by Éretic-Art.