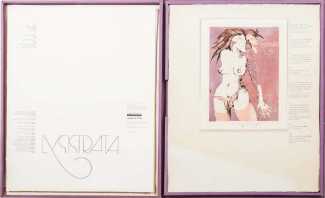 First performed in Athens in 411BC, Greek playwright Aristophanes’ best-known play is about Lysistrata’s extraordinary mission to end the Peloponnesian War. She persuades the women of Greece to withhold sexual privileges from their husbands and lovers as a means of forcing the men to negotiate peace. All does not go according to plan, but the play is notable for being an early exploration of sexual relations in a male-dominated society.

By far the best known illustrator of Lysistrata is Aubrey Beardsley, whose contribution you can see here; it is rather surprising that so few other artists have been inspired to create works based on the powerful drama featuring strong women and their strategies for reining in their menfolk.

The relationship between the determined Lysistrata and the drooling men are given a menacing twist in Eggers’ portfolio, the tensions more hinted at than overt as we see faces and visual hints of sexuality confronting each other.

The Eggers-illustrated Lysistrata was published by Aquarius Press in a limited numbered edition of 100 copies.