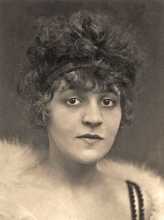 Anita Berber (1899–1928), beautiful, androgynous and bi-sexual, has been described as Europe’s first postmodern woman. She acted in Expressionist films directed by Richard Oswald and co-starring Conrad Veidt. Along with Sebastian Droste she caused a sensation with their series ‘The Dances of Depravity, Horror, and Ecstasy’. She ruled the cabaret and casinos of Berlin during the Weimar Republic, inspiring the careers of Marlene Dietrich and Leni Riefenstahl, and performing exotic dances radiantly naked except for an elegant sable wrap, a pet monkey hanging from her neck, and a silver brooch packed with cocaine. She died tragically, if not surprisingly, at the age of 29, a few months after collapsing at a Beirut nightclub while performing abroad.

The Berlin-based Gurlitt Gallery Press commissioned Berend to produce a series of drawings of Berber in the summer of 1919, and printed just eighty sets of the Anita Berber portfolio. Berend hand-printed and signed forty of the sets, Fritz Gurlitt assuming that because of their high cost and tiny print run the series would probably elude Berlin’s hard-line censors. He was wrong – the portfolio was labelled pornographic and quickly suppressed. Ten years later the the drawings reappeared in Vienna, but only as inferior reproductions. Berend’s drawings became some the most enduring images of Anita Berber between the time of her death and the beginning of Nazi rule.

Berend sketched eight images of Berber, each capturing her in a new and more provocative pose. There was the terrified child in a short hoop-skirt which fell just below her naval, directing the viewer’s eye straight to the startled figure’s exposed vulva and lower torso; the smiling adolescent, bagging her nightgown from top to bottom to display her boyish breasts as well as her pubic hair and a single silk stocking; the confident fashion model sprawled across a chair; the inviting whore, sensationally naked except for an open black overcoat, rolled-up stockings and high-heeled pumps; the saucy revue-girl at her makeup table, tonguing a phallic-looking oyster; a hard-faced dancer in Parisian attire, expertly pleasuring herself with her right leg thrown over the arm of a chair; a beckoning bride, wearing only dark hosiery, in a curtained chamber room; and a naked open-mouthed showgirl, seated on her fur wraps. 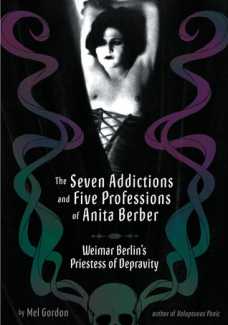 For anyone interested in Anita Berber, Mel Gordon’s book The Seven Addictions and Five Professions of Anita Berber, Weimar Berlin’s Priestess of Depravity (Feral House, 2006) gives an in-depth account of Berber’s life and career, including dozens of contemporary photographs and artworks.