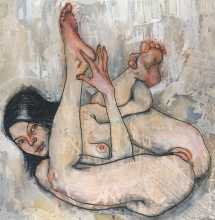 One of Jeff Faerber’s favourite painting subjects is naked women. As with all his work, his is not particularly interested in conventional ideas about ‘the nude’ – his women are real, solid, down-to-earth, and fully sexual. Yet Faerber’s Eros paintings are far from purely voyeuristic; he clearly appreciates the physical variety of his naked subjects, but they are also honest and all-embracing body-portraits of his women friends.

And Faerber’s motivation in painting naked women the way he does? He explains, ‘Once, when I was submitting paintings to a nude-themed show, the curator asked all the participating artists why they painted nudes. I responded with one word – hormones. To elaborate, I was raised in a religiously conservative household, where nudity and sexuality were associated with sin and guilt. This seems to have had the exact opposite effect on me, and has drawn me to eroticism, especially when it crosses paths with art. I’ve always been drawn to painters such as Rembrandt and Jenny Saville, as well as contemporary comic book artists such as Kent Williams, Dave McKean and Bill Sinkevitch. For my Eros series of paintings, I was influenced by the drawings of Gustav Klimt as well as all the work by Egon Schiele. A fellow painter once described my work as having a sense of morbid sensuality, and that is about as accurate and succinct description as I could ever hope for. Hormones, and morbid sensuality.’