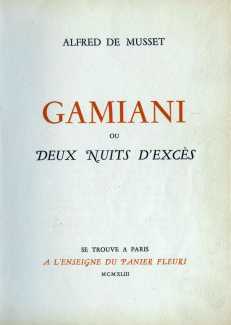 Gamiani is a text that many illustrators aspired to be commissioned for, and Egli achieved the accolade late in his career, when a group of rich bibliophiles asked him to produce some of the most explicit drawings of his long career.

The Carlègle-illustrated Gamiani was published ‘À l’Enseigne du Panier Fleuri’ (Le Panier Fleuri – The Flower Basket – was a well-known Paris brothel in the 1940s), in a limited numbered edition of 500 copies.