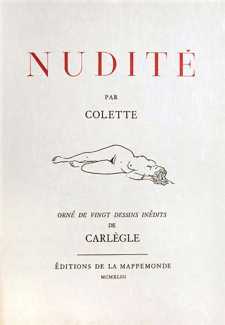 In Paris on the brink of war in 1938–9, the controversial writer and performer Colette (1873–1954, whose full name was Sidonie-Gabrielle Colette), wrote two extended articles for the magazine Paris-Soir on the subject of nudity. Four years later they were published in Brussels in a charming little book entitled Nudité, illustrated with appropriately-naked studies by Egli/Carlègle.

Colette’s views on nudity were already well-known when she put pen to paper in 1938. She had started writing on the subject as early as 1900, when she had seen ‘les femmes potelées’ (‘the chubby women’) scantily-clad onstage at the Folies-Bergère. She went on to describe her own experiences of the fear of men seeing her naked, through the shared embarrassment of newly-weds naked with each other for the first time, to her own liberation as a performer.

Her formative experience was performing in La Chair (Flesh) in 1907, alongside Georges Wague, who had co-written the play with Leon Lambert. It was Colette’s greatest stage success, helped no doubt by a scene in which she appeared with one breast clearly exposed.

By the time she wrote Nudité, Colette was a well-established writer, and her mature thoughts about nakedness and intimacy can be seen as part of an exploration that started in earnest with her stage experiences, so well described in La vagabonde (The Vagabond, 1910) and L’envers du music hall (Behind the Music Hall, 1913), and continued with her thoughts about sexuality, particularly the question of male behaviour, which she had been questioning since Le pur et l’impur (The Pure and the Impure, 1932) and La chatte (The Cat, 1933).

Nudité brings together many aspects of Colettian aesthetics, above all the idea of the undisputable beauty of the naked human body, which must always be respected and taken seriously. Egli’s drawings perfectly match the gravity of Colette’s profound words.

Nudité was published by Éditions de la Mappemonde in a limited numbered edition of 485 copies.