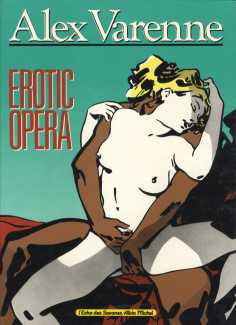 At least in the two narratives which bracket the volume, ‘Opera Boum’ and ‘Opera Rut’ (Boom Opera and Rutting Opera), the imaginative drawing just about redeems the plot. The naked statues in front of the famous Palais Garnier in Paris’s Place de l’Opéra come to life and assist the desperate human protagonist in finding sexual satisfaction – before reminding him that they are only statues.