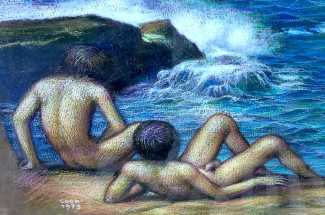 This wide-ranging selection of Gaston Goor’s homoerotic drawings and paintings cover are presented here in roughly chronological order, from a 1940 study for a large painting entitled ‘Homere et les bergers’ (Homer and the Shepherds) to some 1973 pastel beach scenes inspired by his time on the Mediterranean coast at Hyères. It is clear that after his meetings with Roger Peyrefitte and Renaud Icard, and especially in the postwar period, he became much freer to explore homoerotic themes in his art.

His wit and imagination are abundantly apparent in many of these works, his ‘Mona Lisa’ of 1973 being a wonderful example. Naked boys at play in the woods and on the beach are a regular theme, as is the influence of classical art.