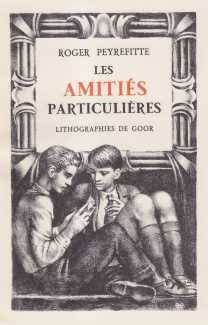 It was a fortuitous meeting in 1950 that brought Gaston Goor and Roger Peyrefitte’s lives and careers into proximity, each recognising in the other a need to explore openly their homosexuality. Born into a middle class bourgeois family, Peyrefitte went to Jesuit and Lazarist boarding schools and then studied language and literature in the University of Toulouse. After graduating first of his year from Institut d’Études Politiques de Paris in 1930, he worked as an embassy secretary in Athens between 1933 and 1938. Back in Paris, he had to resign in 1940 for personal reasons before being reintegrated in 1943 and finally ending his diplomatic career in 1945.

He wrote openly about his homoerotic experiences in boarding school in his 1943 first novel Les amitiés particulières (Special Friendships), which won the coveted Prix Renaudot in 1944. The book was made into a film of the same name which was released in 1964. On the set, Peyrefitte met the twelve-year-old Alain-Philippe Malagnac d’Argens de Villèle, and both fell in love. Peyrefitte tells the story of their relationship in Notre amour (Our Love, 1967) and L’enfant de cœur (Child of the Heart, 1978).

In his memoirs, Propos secrets, Peyrefitte wrote extensively about his youth, his sex life, his years as a diplomat, his travels to Greece and Italy, and his troubles with the police for sexually harassing male teenagers. He also gave vent to his fierce love of snobbish genealogising and vitriolic well-documented gossip, writing about famous people of his time incuding André Gide, Henry de Montherlant, François Mauriac, André Malraux, Jean Cocteau, Jean Genet, Marcel Jouhandeau, Marie-Laure de Noailles, Gaston Gallimard, Jean-Paul Sartre, Charles de Gaulle, Giscard d’Estaing and Georges Pompidou. Claiming he had reliable sources within the Vatican, he stated that three twentieth-century popes – Pius XII, John XXIII and Paul VI – were homosexual. He particularly loved to expose the hypocrisy and vanity of prominent people, to denounce fake aristocrats, and to out closeted homosexuals.

Goor and Peyrefritte were introduced to each other through Peyrefitte’s publisher, Flammarion, and were soon close friends. Roger Peyrefitte introduced Goor to his circle of gay friends, which resulted in much of the homoerotic work produced in Goor’s later life.