The Joy of Gay Sex 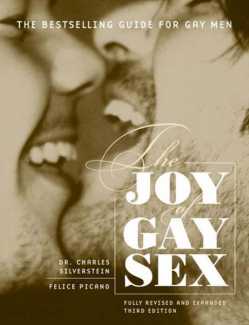 Following the enormous and unexpected success of The Joy of Sex in 1972, it was inevitable that similar volumes for the non-straight sexual communities would follow hot on its heels. In 1977 Simon and Schuster published The Joy of Lesbian Sex by Emily Sisley and Bertha Harris, and in the same year Crown produced The Joy of Gay Sex, written by therapist and clinician Charles Silverstein and novelist Edmund White. The first edition of The Joy of Gay Sex was illustrated with poor line drawings in a similar style to the original Joy of Sex, but when the third edition was published in 2004, now written by Charles Silverstein and Felice Picano with an introduction by Edmund White, publisher Harper Collins commissioned Joe (here ‘Joseph’) Phillips to create fifty new line drawings to accompany the text.

Phillips’ illustrations for Joy are some of the best and most sensitive portrayals ever made of gay love and passion, and in some ways it is a pity that his preferred medium is now colourful and photo-realistic rather than more restrained drawing. We have included only a few of his illustrations to the book here; if you want to see them all you will have to go and buy your own copy.