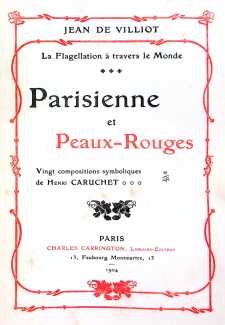 Less explicable are the title, authorship and illustrations of this strange hybrid brick of a book. Parisienne et Peaux-rouges translates as Parisiennes and Redskins, and though native Americans were quite a novelty in 1904 Paris there are zero references to them in the five narratives that make up the text. The red skins of the title are clearly Carrington’s attempt at clickbait, with their less-than-subtle suggestion of marks resulting from the flagellation of the subtitle.

And the twenty Caruchet illustrations? They have almost nothing at all to do with the text beyond a little incidental nudity. The most likely explanation is that Carrington had seen Caruchet’s work, and either asked (or failed to ask, as was often the case) the artist’s permission to use the most risqué of his work to embellish his major new ‘scientific’ work on flagellation. If Caruchet was asked, he might have seen the request as part of a liberal concept which fitted with his socialist ideals, and might also have been glad of any financial consideration that was offered.