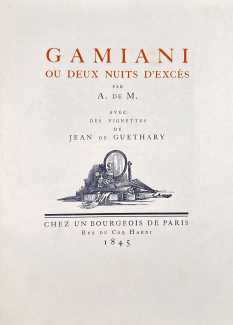 Interestingly the Daragnès-illustrated edition offers Alcide a second night (deux nuits) of excess; it depends where you start measuring the twenty-four hours.

It was almost inevitable that Daragnès would produce illustrations for Gamiani – it was a rite de passage expected from any artist wanting to make a name in erotic illustration, and would have been well-rewarded by its wealthy clientele eager to possess a fine limited edition. However, in order to distance the portfolio from his more mainstream output, Daragnès chose to use the pseudonym Jean de Guethary for his Gamiani. Coming hot on the heels of his Verlaine plates, the trademark bold compositions cover all the key aspects of Musset’s narrative, including both the ape and the hanged man. The Daragnès-illustrated Gamiani is considered by many to be the artist’s finest work.

The Daragnès-illustrated Gamiani was published under the imprint Chez un bourgeois de Paris, rue du Coq Hardi (The House of a Parisian Bourgeois, Street of the Bold Rooster). The date given on the title page of 1845 is when the third Devéria-illustrated edition of Gamiani – which you can see here – was published, and not the actual publication date of this edition. 110 numbered copies of the Daragnès-illustrated Gamiani were printed, ten of which included a set of illustrations in sanguine and an original drawing, some of which are included here.