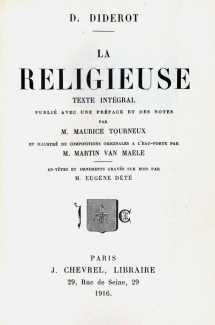 La religieuse (Memoirs of a Nun) by the French writer Denis Diderot was completed in about 1780, and first published by Friedrich Melchior Grimm in 1792, eight years after Diderot’s death. The novel began not as a work for literary consumption, but as an elaborate practical joke aimed at luring the Marquis de Croismare, a companion of Diderot’s, back to Paris. The novel consists of a series of letters purporting to be from a nun, Suzanne, who implores the Marquis to help her renounce her vows, and describes her intolerable life in the convent to which she has been committed against her will.

In 1758 the Marquis involved himself in a controversial case where a nun, Marguerite Delamarre, was trying to be dispensed from her vows and return to society. The Marquis pitied Marguerite and unsuccessfully tried to use his political influence to liberate her. After losing the case in 1758, Marguerite was forced to remain in the convent for the rest of her life. Diderot used Marguerite Delamarre as a prototype for Suzanne, thinking Croismare would be persuaded to return to Paris in order to save Suzanne from her misery in the convent. This practical joke turned into a passionate project for Diderot, in which he self-identified as a woman, later revising the letters into a novel depicting the corruption rampant in religious institutions.

The narrative recounts the experiences of Suzanne Simonin, an intelligent and sensitive sixteen-year-old girl who is forced against her will into a Catholic convent by her parents. Suzanne’s parents initially inform her that she is being sent to the convent for financial reasons; however, while in the convent it is revealed to Suzanne that she is actually there because she is an illegitimate child.

At the convent, Suzanne suffers humiliation, harassment and violence because she refuses to make the vows of the religious community. She eventually finds companionship with the Mother Superior, Sister Moni, as she pities Suzanne’s anguish, and in the days leading up her death, Sister Moni comforts Suzanne through prayer and her understanding of Suzanne’s torment. Sister Moni is succeeded by Sister Sainte-Christine, who does not share the same empathy, and even blames Suzanne for the death of Sister Moni.

Suzanne contacts her lawyer, Manouri, who attempts to legally free her from her vows. She loses the legal battle, but Manouri manages to transfer Suzanne to another convent, Sainte-Eutrope, liberating her from Sister Sainte-Christine’s persecution. At Sainte-Eutrope the Mother Superior is revealed to be a lesbian, who grows affectionate towards Suzanne. She attempts to seduce Suzanne, but the girl’s innocence and chastity eventually drive the Mother Superior to insanity and death.

With the help of a priest, Suzanne escapes Sainte-Eutrope, but lives in constant fear of being captured and taken back to the convent as she waits for the assistance of the Marquis de Croismare.

Martin van Maële’s suite of ten plates for this edition of 1916 is a perfect complement to Diderot’s text, offering just enough naked flesh to keep the reader’s appetite whetted.

There are several excellent English translations of La religieuse, including editions in Penguin Classics and Oxford World Classics. For a free PDF version, here is a link to the 1918 translation by Francis Birrell, published by Routledge in their Broadway Library of Eighteenth Century French Literature.