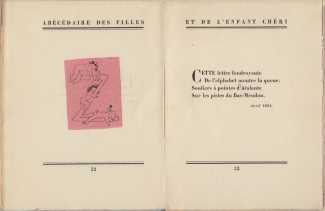 The Abécédaire des filles et de l’enfant chéri (A Primer for Girls and for the Beloved Child), with short verses by Pierre Mac Orlan and illustrations by Jules Pascin, was the brainchild of Paris publisher Henri Jonquières. Well known for publishing high-quality books with carefully-chosen illustrations, his Les Beaux Romans were expensive and prized. The first edition of Abécédaire appeared in 1924, and showed Pascin’s letters, which started life as simple line drawings, on plain coloured backgrounds; this was produced in an edition of just 150 copies and sold out very quickly. 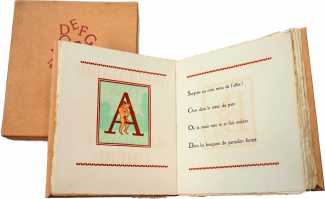 By 1933, however, Jonquières’ business was in financial difficulties, and finally went into receivership in 1935. It is not known whether the 1935 version of Abécédaire, with redrawn coloured woodcut versions of Pascin’s letters, was one of the last books to be published by Éditions Henri Jonquières, as no imprint is shown. It was published in a boxed numbered limited edition of 250 copies.

The Abécédaire illustrations show Pascin at his most disciplined, the twenty-six matched drawings including a great deal of wit and imagination as the naked figures, the men sporting healthy erections, cavort around the letters.