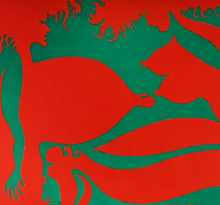 Dobkowski started experimenting with two-colour paintings in 1968, influenced by the simplicity and bold colours of Pop Art. Displayed at several exhibitions in Poland, they quickly became his trademark style, and were well received by critics and audiences.

With titles like Ciało kobiety (Woman’s Body), Wzlatująca (Flying In) and Radosna czułość (Joyful Tenderness), the sinuous canvases in clashing colours at opposite ends of the spectrum make these works at the same time compelling and strangely disturbing.

The red and green period lasted for around four years, though Dobkowski returned to the series in 2003, adding several new paintings in the same style.