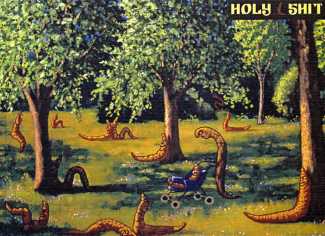 The introduction by Klaus Theuerkauf to Reinhard Scheibner’s first published book of images is headed by an apt quotation from the French avant-garde painter Francis Picabia, ‘Anyone who wants to eat always risks getting indigestion’. Its 120 pages, some in colour, some in monochrome, and some in duotone blue and red, include a wide range of Scheibner’s work from the 1980s and 90s.

In a 2003 review of Holy Shit, Tom Crites writes ‘How does one begin to explain watercolours of naked youths squeezing shit out of a giant sea cucumber to fertilise phallic cacti? In this hallucinatory multimedia collection, Reinhard Scheibner doesn’t strictly offer any explanation, rather he simply opens up the vaults of repression and desire and evacuates them upon the drafting table. In a therapeutically fetishistic representation of a pure fascination with metropolitan squalor, Scheibner displays a simultaneous fascination and contempt for humanity, sparing not even himself in what literally becomes a sociological and scatological deconstruction. Faecal representations of humanity appear throughout Holy Shit, and whether in rips on the Impressionists and social scenes or with lively turds painted onto home furnishings and moulded anthropomorphic faeces, Scheibner takes the lowest possible look at society in this aptly titled tome. But it’s not all about shit. Other sick wonders herein include self-mutilation, auto-fellatio, darkly expressive nightlife settings, monstrous sexual and scientific experiments, psychedelic microbes, dances of pleasure and death, scenes of cannibalism and racism, and a wide array of sexual activities conducted out of boredom, depravity, or anything other than love.’

As Theuerkauf  concludes in his introduction, ‘Scheibner is touched by the reality of the world, but is no longer surprised; he finds all this earthly nonsense more amusing than tragic. We imagine ourselves complicit in his humour, or else we deny it because we find it too repugnant – when faced with the work of Scheibner, as with any great artist, any position taken is extreme.’

Holy Shit is published by Le Dernier Cri, Marseilles, and can be ordered from the publisher here.