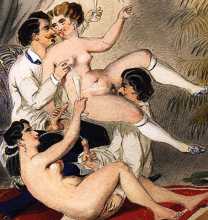 In this portfolio of twenty Biedermeyer-style prints, which were probably made in Vienna in the mid-1850s, Herr Anon produced a colourful set of prints entitled Bilder ohne Worter (Pictures without Words), exploring a range of sexual encounters including a fair amount of lesbian fantasy.

As with the Nuditäten portfolio, which you can see here, Bilder ohne Worter has sometimes been attributed to the German painter, muralist and illustrator Wilhelm von Kaulbach (1805–74), but there is nothing else in his work that suggests the veracity of such a connection. It seems more likely that a link was made between Bilder ohne Worter and von Kaulbach some time during the 1950s, and has been perpetuated ever since. Let us know if you have evidence to the contrary.