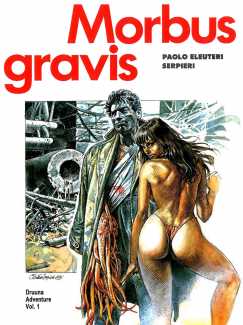 Morbus Gravis (Serious Disease) is an unlikely debut for a sex goddess. Druuna is introduced as a young woman living in an unnamed city with her lover Shastar, who has been infected with a disease that has transformed him into a monster. The city is a grim place, where the infected are hunted by holy men and sentenced to live in the lower levels of the city, while healthy specimens are selected to live in the top levels where there is no disease. Outside the city borders, hordes of mutants roam and prey on the uninfected, murdering and raping any who fall into their clutches. To survive in this savage world, Druuna is forced to sell her body in exchange for ‘serum’, a drug whose purpose is never really explained. In the end Druuna and Shastar embark on a journey where he reveals the truth behind the city and the holy men, leaving the reader with a bleak and shocking ending.

Morbus Gravis was in many ways Serpieri’s reaction to the AIDS epidemic. Friends of his died of the disease, which he saw as a threat to the natural impulses of the young by making the very act of sex a possible death sentence. This bleak view bled into the first volume, steeped with dark pessimism. The infected are shunned, while the ending evokes a powerful image of a species seemingly doomed at its own hand.

Here we show the first twenty pages of the 64-page story.

Morbus Gravis was published in French by Dargaud, and in English by Heavy Metal in 1986.