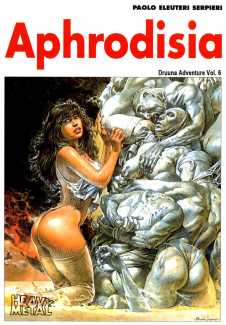 After Morbus Gravis the Druuna saga continued, becoming ever more graphic and liberal in its depictions of sex and violence. What was hinted at before was now in clear view and brutal in its depiction. The art improved tremendously, becoming less dark and more detailed over time, replacing the heavy dark shadows of the first volume with clearer linework and more detailed rendering, often employing hundreds of lines to give dimension to the smallest curves and dimples of Druuna’s body as well as more intricate and original monsters. The colours became brighter too, offering some truly stunning background scenery.

The narrative, however, is another matter. While the second and third volumes, Druuna and Creatura, carried on from the original starting point, in the fourth book, Carnivora, the story became more experimental and less connected with its previous instalments, opting for a more of a new experience with each book rather than a cohesive flowing story. Topics of time travel, trans-humanism and cloning were introduced, though these seem to be little more than excuses to drag Druuna from one sexual escapade to another, some of them being dream sequences that only vaguely related to the main narrative.

By the time the sixth volume, Aphrodisia, appeared in 1997, the storyline had become even more fantastic and hard to follow, while the graphic sexual scenes reached a new level of explicit depiction. In the sequence shown here, a naked Druuna emerges from the sea and proceeds to have sex with a young stud provided for her pleasure. An older voyeur (a Serpieri clone?) joins in the action and writes a mystery word in the sand. Her lovers disappear and the landscape shifts to a rocky cliff where Druuna encounters a clone of herself. Clone Druuna vanishes and enters Druuna’s physical body, while naked Druuna in the dreamworld runs into her old friend Paula, and they they both proceed to join a random orgy. A coherent story, or just an excuse to draw sex scenes?

Aphrodisia was published in French by Bagheera and in English by Heavy Metal.