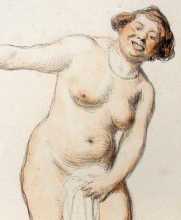 Jean Veber’s paintings and lithographs were usually preceded by pencil sketches, and he always had a sketchbook with him, taking it to National Assembly public gallery to follow debates, and drawing every stratum of Paris society. His  family, relatives and friends frequently served as models for his sketches and drawings.

When he started experimenting with lithography, printers including Lemercier, Duchâtel and Minot printed proofs from his stones, then in 1904 he acquired his own Brisset press, which resulted in some of his best work. He produced more than two hundred lithographs, but being a perfectionist was rarely satisfied with the quality of his lithographs. His main teacher was Edouard Duchâtel, who trained him in the techniques of the craft. Veber set a very high standard, and remains one of the greatest lithographers of the early twentieth century.

In 1896 he produced a series of drawings and paintings based on the theme of the artist’s relationship with the ‘perfect woman’, recognising that there was a link between men’s perception of innocence, youth, and the inanimate doll. Veber’s doll images would be well worth an in-depth feminist analysis.