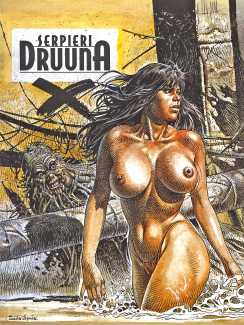 Ever since Druuna first appeared, fans had been clamouring to know more about her and her creator, so in 1993 Serpieri put together an album of sketches and text related to the Druuna series.

A sample or two from that text:

Druuna is the kind of woman I like, slightly candid, almost naive when it comes to love. She really knows her own body and knows she can rely on it to get things done. She is not a saint. She enjoys sex and does not identify it with evil. She knows that puritanism and corruption exist in this world full of prejudices.
I must say that I like to go as far as I can in search of my own fantasies. I like to work that way. To maintain a certain honesty,  look deep within myself, into my fears, my anxieties.
I imagine that some readers may be shocked by the cruder sequences in my stories. I really don’t have a problem with these scenes. I don’t feel that sex is something that should be hidden. In our culture, pleasure is always kept under wraps. When I feel like drawing something that could be considered a bit raw, I do it anyway, although I might come back and change it later.
Sex, pleasure and the body are all an integral part of Druuna. Without them, it would make no sense. Some people might find it a bit gratuitous, but you must bear in mind that wen I draw a scene that is ‘hardcore’ I’m just indulging myself in a bit of pleasure, pleasure that I’m not supposed to take. I had a lot of fun drawing them; I hope my readers enjoy looking at them as much as I had conceiving them.

That was written thirty years ago; it’s interesting to think what difference three decades of social, political and sexual debate have meant for such an approach to explicitly sexual art.

Druuna X was published in French by Bagheera Éditeur and in English by Diva Grafix.