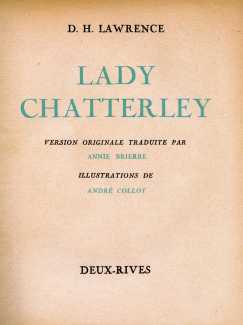 D.H. Lawrence’s last novel, Lady Chatterley’s Lover, written in 1928, has become as notorious from its watershed 1960 obscenity trial as for its important narrative and literary significance. The story, undoubtedly based on the author’s own experiences, concerns a young married woman, Constance, whose upper-class baronet husband, Sir Clifford Chatterley, described as a handsome, well-built man, is paralysed from the waist down because of a Great War injury. In addition to Clifford’s physical limitations, his emotional neglect of Constance forces distance between the couple. Her emotional frustration leads her into an affair with the gamekeeper, Oliver Mellors. The class difference between the couple highlights a major motif of the novel, which is the unfair dominance of intellectuals over the working class. The novel is about Constance’s realisation that she cannot live with the mind alone, but must also be alive physically.

Though only published clandestinely in English in a version published in Italy, Lady Chatterley was published in French translation just a year after its first appearance, and the excellent translation by Annie Brierre has remained in print ever since. Several illustrated editions exist, including one with a rather crude set of illustrations by Edouard Chimot, but this version with sensitive and well-imagined drawings by André Collot captures the sense of the narrative well, even if some of the landscapes are decidedly French rather than Nottinghamshire.

The Collot-illustrated edition of Lady Chatterley was published by Deux-Rives, in a limited numbered edition of 1,000 copies.