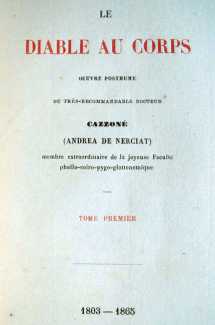 This two-volume 1928 edition of Le diable au corps (Devil in the Flesh), Raymond Radiguet’s controversial 1923 novel of extramarital love, is something of a mystery. Though the text is by Radiguet (who regularly denied having written it), this clandestine version gives the author as ‘Le très-recommendable docteur Cazzoné (Andrea de Nerciat), membre extraordinaire de la joyeuse Faculté phallo-coïro-pygo-glottonomique’. To attract all tastes, this attribution thus covers interests phallic, vulvic, posterior and bosomly. The twelve illustrations are similarly mysterious; they have regularly been attributed to Rops, or at least ‘after Rops’, even though the books appeared long after Rops’ death. It would appear that this clandestine edition, published in Brussels by Briard for Poulet-Malassis, reused Rops illustrations which had previously appeared in a nineteenth-century edition of de Sade’s Justine, and were reworked by Auguste Danse (1829–1929).