Drawing Dicks on the Herald Sun 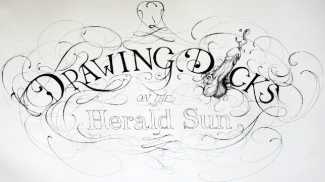 The Herald Sun is a conservative daily tabloid newspaper based in Melbourne, Australia, published by The Herald and Weekly Times, a subsidiary of News Corp Australia, itself a subsidiary of the Murdoch owned News Corp. It was in the early 2010s that Jonathan Guttman started showing his trademark phallic doodles based on Herald Sun pages on his Tumblr account that his undoubted talent for the genre became widely known and appreciated. Soon he had thousands of followers eager to see what he would come up with next. He did not disappoint. Politics and sport are his favourite targets, his detailed pen and ink additions often using the subject and composition of the original photograph to telling and devastating effect.

What is it that draws such a talented artist to what, for most people, would be considered mere doodles? Guttmann explains, ‘Drawing genitals, in particular penises, has been a bit of a hobby of mine since I was a kid. I would sabotage my parents’ notepads or shopping lists with them, or do things like take a business card from a box, draw a boner on it, and then slip it back in somewhere in the pile. I still do it now actually. I remember one time when I was about eleven I had drawn dicks, people having sex and a bunch of turds in my sketchbook; my mother wanted to show a close church friend my drawing skills, so here she is showing off my sketch book and then suddenly, and to their surprise, reached the “naughty page”. I don’t think her friend was all that impressed.’