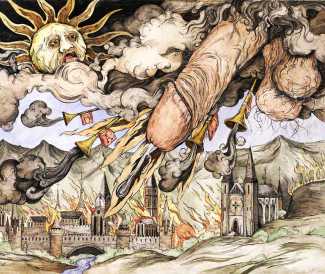 The final book of the Bible and the last of the New Testament is one that occupies a central place in Christian eschatology – The Book of Revelation, often known simply as Revelation or The Apocalypse. This mysterious and symbol-laden text has inspired Jonathan Guthmann’s work for the several years. By portraying some of the most majestic, intense and often upsetting images of its allegorical and literary narrative, Guttman gives these powerful and shocking myths and metaphors an equally powerful visual interpretation.

Central to The Book of Revelation are the Four Horsemen of the Apocalypse – Death, Famine, War and Conquest – and in reframing them as the Four Horsemen of the Acockalypse Guthmann raises the uneasy question of the relationship between masculinity and domination. Following the Horsemen, and each in the three stages of drawing, painting and etching, we have the Acockalypse itself, destroying the Holy City, and two versions of the Whore of Babylon, ‘The Mother of Prostitutes and Abominations of the Earth’ according to Revelation Chapter 17. Then we have The Acockalypse Descending on Paris, a direct reference to the 1880 engraving by Félicien Rops, ‘Satan semant l’ivrai’ (‘Satan sowing weeds’) which you can see here. Though less intrinsically erotic, the sequence shown here concludes with St Michael and the Devil (compare it with the Jacob Epstein sculpture at Coventry Cathedral), The Angel Binding Satan, The Redemptive Lamb, The Winged Creature Like an Ox, The Sea Giving Up Its Dead, and The Last Judgement.

The etchings show a remarkable skill with the technique, producing detailed images which remind the viewer of Albrecht Dürer and Rembrandt van Rijn. Here is how Guttmann explains the process he uses: ‘Etching is a printmaking technique that has been around for centuries. You begin with a flat sheet of metal (I personally use copper), which is covered in a fine layer of bitumen. You then use a sharp instrument to selectively scrape away the bitumen revealing the copper. Once you have created an entire image by scraping away the bitumen, you place the entire sheet in a bath of liquid that is highly corrosive to metal but will not affect the bitumen, this liquid then bites into the areas where you have exposed metal, leaving a network of incised lines.  This process can be repeated multiple times with new lines being added between each etch, meaning there are various depths of line work in different areas. Then the bitumen is removed and the newly created lines in the metal plate are filled with a very stiff ink and the plate is firmly pressed against a piece of wet paper with the aid of a press, then the image is firmly imprinted onto the paper.’