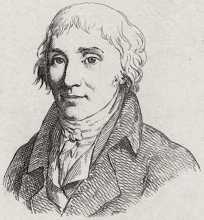 The French poet Évariste Desiré de Forges, Vicomte de Parny (1753–1814) was born in Saint-Paul on the Isle of Bourbon, now Réunion; he came from an aristocratic family which had settled on the island in 1698. When he was ten he moved to France with his two brothers, Jean-Baptiste and Chériseuil, where he studied with the Oratoriens at their college in Rennes, and decided to enter their religious order. He studied theology for six months at the Collège Saint-Firmin in Paris, but decided instead on a military career, explaining that he was not religious enough to become a monk.

In 1785 Parny moved to Pondicherry in India, where he became an aide de camp to the Governor-General of the French colonies in India. He was not at all happy in India, but he gathered a part of the material for his Chansons Madécasses (Songs of Madagascar), one of the first prose poems written in the French language. He soon moved back to France, where he left the army and moved to a house he owned in the valley of Feuillancourt, between Saint-Germain-en-Laye and Marly-le-Roi.

In 1802 Parny married Marie-Françoise Vally, and, the following year was received into the Académie Française. 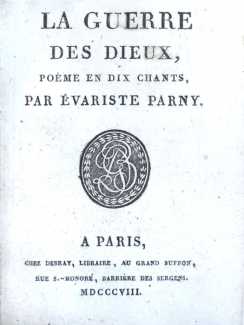 This edition of La guerre des dieux was published by Debray in 1808. The eighteen plates plus a frontispiece, by an unknown hand, were added to some of the copies. They exist in different states, of which this set appears to be the most detailed.