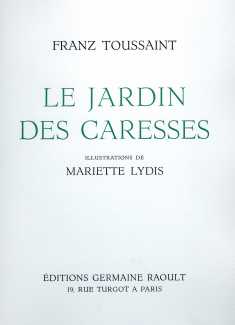 The French writer and orientalist Franz Ernest Henry Toussaint (1879–1955) was the author of numerous translations from Arabic, Persian, Sanskrit and Japanese. His best-known translation, itself adapted into several other languages, is that of the standard French version of the Rubáiyát of Omar Khayyám. Toussaint also wrote the scripts for several silent films, including one, Inch’Allah (God Willing) in 1922, that he filmed himself. His oriental poems have been set to music several times.

Le jardin des caresses was first published by Henri Piazza in 1911, followed by a second Piazza edition in 1914 illustrated by Léon Carré.

The Raoult edition of Le jardin des caresses was produced in a limited, numbered and boxed edition of 350 copies.