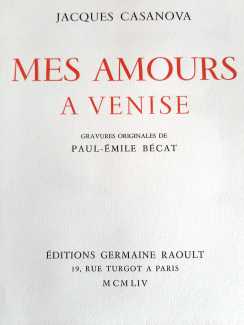 Following the success of the Raoult edition of Arétin’s Les ragionamenti a year earlier, Germaine Raoult commissioned Bécat to produce illustrations for a luxury edition of the selected memoirs of one of the most infamous lovers of all time, Giacomo Casanova, Chevalier de Seingalt (pronounced Saint-Galle in the French fashion) – after his exile from Venice to France in 1757 he often signed his works Jacques Casanova de Seingalt.

As well as chronicling Casanova’s exploits, this selection has a distinct emphasis on the various lesbian encounters described in the memoirs. Bécat’s etchings for this and the other books he illustrated towards the end of his life present a more modern and less stylised set of women’s faces and bodies than some of his earlier work.

The Raoult edition of Mes amours à Venise was produced in a limited numbered and boxed edition of 390 copies.