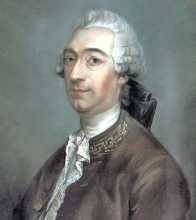 The publication of his Tanzaï et Néadarné, histoire japonaise in 1734 immediately caused a scandal because of its political innuendos and alleged obscenities. It was presented as a Chechian tale translated into first into Japanese, then Chinese, then Dutch, then Latin, and finally into French from the Venetian dialect, a comical mystification which was popular at the time. The story is about a prince, Tanzaï, who marries Néadarné before his twenty-first birthday, thereby violating a pact. As a result his genitals are changed by a fairy into a milk-strainer. The curse can only be lifted only if Tanzaï succeeds in having the strainer licked clean by a high priest. Néadarné undergoes a similar enchantment. Parallel to this story is the rivalry between the demon Jonquille and the fairy Barbacela. The novel is an example of Crébillon’s method of combining political and social criticism with stories of love and supernatural elements. 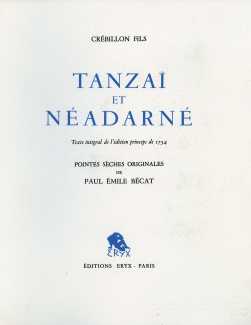 Tanzaï et Néadarné contains thinly-veiled attacks on the Papal bull Unigenitus, the Cardinal de Rohan, and other church dignitaries, resulting in Crébillon being incarcerated briefly in the prison at Vincennes.

Bécat’s plates for this new edition of Tanzaï et Néadarné come from one of his busiest periods as an illustrator, and show signs of being done in haste. All the elements are there, but both the quality and originality of the interpretation are not of his usual high quality. As well as the coloured plates from the standard edition of the book, we have included some of the plates with ‘remarques’, the smaller marginal drawings included only in the additional set of prints destined for 60 de luxe copies.

The Bécat-illustrated Tanzaï et Néadarné was published by Éditions Eryx, Paris, in a limited numbered and boxed edition of 429 copies.