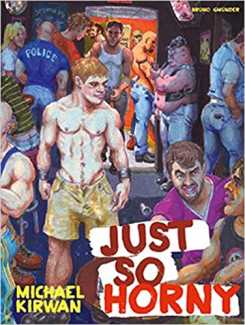 Selections of Michael Kirwan’s works have appeared in numerous books, but a highlight for him came in 2011 as a broad retrospective of his paintings was published in a monograph book titled Just So Horny. The obvious theme tying the works together was Michael’s obsessive attention to details, patterns, and backgrounds. The characters he drew were front and centre, but Michael gave them life in a rich and colourful environment he painted on paper as he created the elaborate backstories in his head. Much of Michael’s work was created with fine-point Prismacolor markers, blending an abundance of colours and layers to create fantasies filled with his humour and wry sense of style. Michael rarely drew in front of anyone because he preferred solitude as he worked hunched over an art pad, straining and crossing his eyes as he created minute details and repeating patterns.

Rather than a photorealist or idealist approach, he drew characters semi-cartoonishly, to universalise the scenes for audience identification. He depicted diverse subjects – including inter-racial and inter-generational scenes, and people from different socio-economic backgrounds – who were not physical ideals, sometimes with disabilities or physical deformities. He wrote ‘My guys are stand-ins for everyone who's ever sucked a dick, incorporating the lust, confusion, contentment, guilt, passion, and bonding that I observe in the homo realm’. His style has been likened to George Grosz, Paul Cadmus and Robert Crumb.

While sometimes appearing a little primitive, all his work was carefully planned. Each drawing was preceded by a plethora of sketches. He was careful with each background detail, and each drawing contains multiple layers of colour. He loved studying patterns – tiles, bricks and fabric folds are carefully observed – and he often included a mirror to reflect parts of the image outside the frame.